For 100 years, Faith Baptist Bible College and Theological Seminary has been preparing men and women for God’s calling on their lives. See the rich history of God’s faithfulness to the ministry of Faith. Check out our Centennial page. In 1893 at the Chicago World’s Fair, William H. Jordan heard D. L. Moody speak about the importance of training Christian workers for the ministry. Deeply impressed by Moody’s vision, Jordan developed a burden to see schools established to carry on that vision. In 1921, he became pastor of Third Presbyterian Church in Omaha, Nebraska. There, the spark that D. L. Moody had ignited in Jordan produced a small, nondenominational Bible school known as the Omaha Bible Institute (OBI). Classes began in the summer of 1921 and continued for many years with Dr. Jordan as President of the school. 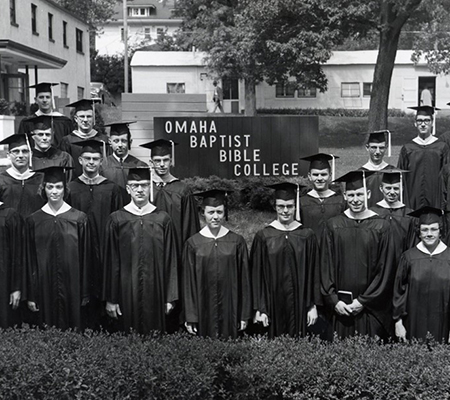 During the mid-1940s, the trustees wondered whether the school should continue. One of the part-time faculty members at that time was Dr. John L. Patten, pastor of Grace Baptist Church in Omaha, Nebraska. Dr. Patten shared Dr. Jordan’s vision for the school and was firmly convinced that its need was still valid, so he volunteered to step into the place of leadership. In the mid-1950s, the institution aggressively sought the approval and support of Baptists and changed the name to Omaha Baptist Bible Institute (OBBI). On June 22, 1956, the Council of Fourteen of the General Association of Regular Baptist Churches voted to approve OBBI as an independent, fundamental Baptist educational institution. The courses were broadened, and curricula expanded, in the desire to establish the school on the collegiate level. To reflect this emphasis, the name was changed again in 1960 to Omaha Baptist Bible College (OBBC). The enrollment outgrew the Omaha facilities, so in 1965 the Board of Directors voted to relocate the campus to Ankeny, Iowa. When OBBC’s president John L. Patten resigned because of health reasons in 1965, the school called Dr. David Nettleton to be its president.

Over the next few years, David Nettleton led in raising money and building a new campus in Ankeny. In 1969 he walked from Omaha to Ankeny to celebrate the completion of the sale of the Omaha campus and to raise money for a classroom building. The move was accomplished during the summer of 1967, and Faith Baptist Bible College opened for classes that October. A graduate program offering the Master of Arts (M.A.) degree in Pastoral Studies was initiated in the fall of 1982. In January of 1986, the Board of Directors established Faith Baptist Theological Seminary, transferring the graduate programs from the College to the Seminary. Two more M.A. programs, Biblical Studies and Theological Studies, were added. At the same time of the development of FBTS, the Board of Directors began talks with Denver Baptist Bible College and Seminary to merge the two schools. Denver Baptist Bible College had been established in 1952 by Dr. Sam Bradford, pastor of Beth Eden Baptist Church in Denver, Colorado. They added a seminary program in 1972, and the schools became approved by the General Association of Regular Baptist Churches in 1977. Faith and Denver had much in common and determined that a partnership would provide greater academic strength to the graduate program.

The Seminary officially began in the fall of 1986 with thirty students. Three Master of Arts degree programs and a three-year Master of Divinity (M.Div.) degree were offered. With these decisions, Faith Baptist Bible College and Theological Seminary made a definite move from offering post-secondary education to offering the elements of higher education in ministry training.